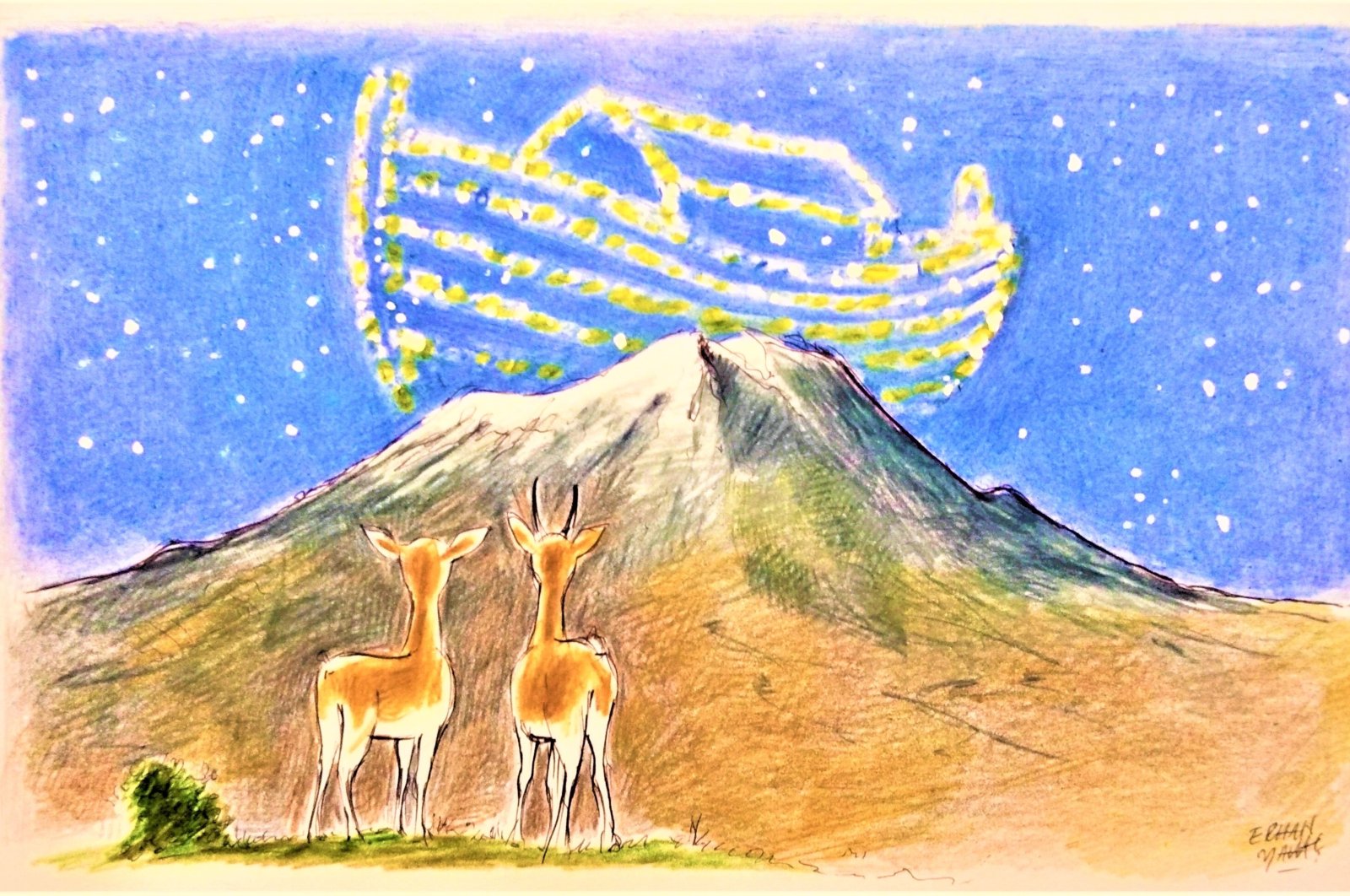 According to the holy books of the Torah, the Bible and the Quran, the Prophet Noah tried to call people to believe in the one God for years, but few people responded positively. After receiving a revelation, he built a ship to house a pair of every living creature and those small few who believed in him.

From the expression “water gushed forth from the Oven” (Surah Hud: 40) in the verse of the Quran, most scholars deduced that Noah’s Ark had advanced technology and was powered by steam. Noah is considered the master of sailors and carpenters.

After heavy rains that fell for days, the whole world was covered with water. Disbelievers perished. In time the waters receded, and Noah’s Ark landed on earth. Noah and his family lived prosperously in this new land and multiplied. All of the humans throughout history were descended from Noah’s three sons who got on the ark; all living things are descended from a pair of their kind taken aboard the ship.

Although it is very ancient, the most commonly remembered historical event in all cultures is the flood. The Sumerian “Epic of Gilgamesh” is based on the flood. Egyptian oracles, Greek philosophers, Persian and Chinese historians, Indian Brahmans, Welsh, Scandinavian, Maya, Aztec and Native American legends all speak of the flood.

A fresco by Aurelio Luini depicting Noah’s Ark with many kinds of animals boarding the wooden ship, including unicorns, at the San Maurizio al Monastero Maggiore Church, in Milano, Italy, Sept. 2, 2017. (Shutterstock Photo)

The stages of the event are almost the same, but the names are different. For example, in Greek mythology, the story tells of the savior Deucalion and his wife Pyrrha; and the name of the mountain on which the ship went is Parnassus.

Is there a mountain called Ararat?

In the Torah, it is told that Noah’s Ark landed on the Ararat Mountains. The Assyrians used to call their neighbors, who lived in Eastern Anatolia and called themselves Halti, as Urartu. Ararat comes from Urartu. It means the places irrigated by the Aras River. Today, this mountain is in the easternmost part of Anatolia, on the border of Turkey and Armenia.

Armenians, one of the oldest Christian communities, call this mountain Masis. It means “Mother of the World.” St. Nicholas of Damascus was the first to say that Ararat in the Torah was Masis. The Armenians embraced this rumor and thus it spread to the world.

Ağrı, the name of Mount Ararat in Turkish, comes from the Kurdish word “Agir,” which means fire. “Agiri” means fiery. Indeed, it was a volcanic mountain. It last erupted in the 1840s. Today, still, trees do not grow there, it is impossible to find water since the rocks absorb it. Nothing is heard but the roar of rocks rolling high above them with constant storms. For this reason, the Armenians also call Masis the World of Darkness.

Once there was a village called Arguri in a valley descending deep into the mountain; above this, at an altitude of 1,800 meters (5,900 feet), was the St. Yakobus Monastery. According to the legend, the monastery was on the place where the Prophet Noah built the first temple after the flood, and there was a large cross made from the remains of the ark.

The village and the monastery were destroyed in an earthquake in 1846. It is believed that just above the village, a small willow tree grows from a part of the ship, and that the Prophet Noah planted the vineyard next to the monastery.

To the north of the mountain is the city of Nakhchivan, which means “first seen.” Nakhchivan was the first city established after the flood, and its name comes from Noah.

Since 1829, European travelers and scientists have repeatedly climbed Mount Ararat and searched of Noah’s Ark. They claimed that they found the three-decked ship according to the measurements of 150 meters by 25 meters by 15 meters given in the Bible, and even bought some parts. Later on, the pilots said that they had even took pictures of the ship. Representative pictures were drawn. Newspapers made a sensation of the event. In fact, Americans built the Oregon warship according to these stories.

The staunchest follower of this claim in Turkey was Republican People’s Party (CHP) politician Kasım Gülek. It was later revealed that none of the stories were true. The items received did not pass the carbon 14 test. It turned out that what was thought to be a ship was a landmass that looked similar to a ship.

A boat-shaped rock formation some believe is the remains of Noah’s Ark at the spot near Mount Ararat, in Doğubeyazıt, Ağrı, eastern Turkey. (Shutterstock Photo)

Over time, it was claimed that this kind of research was a money trap. Researchers would advertise for days to find sponsors, going from church to church and giving paid lectures. Religious people did not shy away from donations. Then they would come to Mount Ararat, take pictures and on the way back say, “We couldn’t find it this time, but next time, definitely.”

After the debacle of Mount Ararat, foreigners headed for Mount Judi. The Quran clearly states that the ship was sitting on Judi: “Then the word went forth: ‘O earth! swallow up thy water, and O sky! Withhold (thy rain)!’ and the water abated, and the matter was ended. The Ark rested on Mount Judi, and the word went forth: ‘Away with those who do wrong!'” (Surah Hud: 44).

Quranic commentaries concur that Judi is a mountain near Mosul. Even literally, Islamic scholars praise this mountain for humbly taking on the ship.

While describing the flood, the Babylonian priest Berossos, who lived around 250 B.C., says that the ship sat in the Cordyean Mountains and that its remains are still present, and that people even made amulets from its parts.

These mountains are located on the southwest shores of Lake Van. And it is where Mount Judi stands. Just north of Mesopotamia, where the Prophet Noah lived, it is the only high mountain, with an altitude of 2,144 meters, the most suitable for a ship to land on.

The dove, which was sent to see if the flood was over, returned with an olive branch in its mouth. On the skirts of Mount Ararat, which is 5,137 meters tall, neither olive nor any other trees grow because of the cold while the southwest of Judi is an olive grove.

According to Islamic belief, the place where Noah’s Ark descended after the flood is Mount Judi, Şırnak, southeastern Turkey. (Shutterstock Photo)

As both mountains are in eastern Anatolia, there is no reason why Mount Judi should not be considered a part of the Ararat Mountains mentioned in the Torah.

As mentioned in a verse of the Quran, “And the people of Noah, when they rejected the messengers, We drowned them, and We made them as a sign for humanity” (Surah Al-Furqan: 37). Some tafsir (exegesis) scholars concluded that the remains of the ship would not be lost.

It is narrated that the Prophet Muhammad once said, “There is something left behind from Noah’s Ark, where the first of this ummah (Muslims) will catch up.” This might have been one of the reasons that made people look for the ship.


x
x
Clicking on the "accept" button helps us decide on the product to be shown to you inside or outside of our site and to measure the target audience visiting our websites and to like or share the things you want directly on social media.
You agree to the use of analytical cookies (cookies used to learn about the use of the website and to improve our site and services) and tracking cookies (from both tourismagency.net and other trusted partners).
.
SettingsAcceptDecline

This website uses cookies to improve your experience while you navigate through the website. Out of these, the cookies that are categorized as necessary are stored on your browser as they are essential for the working of basic functionalities of the website. We also use third-party cookies that help us analyze and understand how you use this website. These cookies will be stored in your browser only with your consent. You also have the option to opt-out of these cookies. But opting out of some of these cookies may affect your browsing experience.
Necessary Always Enabled
Necessary cookies are absolutely essential for the website to function properly. This category only includes cookies that ensures basic functionalities and security features of the website. These cookies do not store any personal information.
Non-necessary
Any cookies that may not be particularly necessary for the website to function and is used specifically to collect user personal data via analytics, ads, other embedded contents are termed as non-necessary cookies. It is mandatory to procure user consent prior to running these cookies on your website.
SAVE & ACCEPT